About a year and a half ago, “La Nouba,” the resident Cirque du Soliel show at Disney Springs (back then it was still Downtown Disney) introduced a duo of new clowns. It was a nice refresh to an already fantastic experience. The team at “La Nouba” is at it again, this time bringing in two brand-new acts: a high-energy trio of breakdancing b-boys that will make your head spin and a mesmerizing aerial bamboo act that will leave you breathless.

I recently had to a chance to see the revamped show and it blew me away. While the experience is constantly being tweaked with subtle updates, these additions make the opening sequence and the acts that follow feel entirely new and fresh.

If you’re a fan of shows like “You Think You Can Dance” and “America’s Best Dance Crew” then the b-boys may very well become your favorite act. The performers, all well-known solo artists, go by stage names Bebo, Incredible Josh and Flying-buddha. They mix hip-hop and breakdance moves in dizzying combinations; with choreography that merges from freestyle solo moments to precision-timed moves in unison, I can only imagine how much time the boys spent in rehearsal before hitting the stage.

I wasn’t the only one who was impressed. A quick glance around the theatre confirmed that the b-boys had everyone under their spell; the kids in the audience were especially entranced, most wearing a “how did they do that?” look of awe. 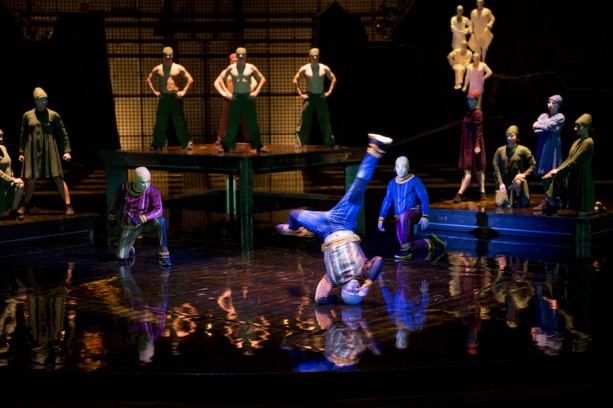 In the coming weeks, I’ll be doing a follow-up story about the new aerial bamboo act here on the Disney Parks Blog. In the meantime, visit the “La Nouba” website or call (407) 939-7600 to learn more about the show and purchase tickets.

Shanghai Disneyland's Pirates of the Caribbean is Unreal [Video] 2015 Begins with the Destruction of the Sorcerer's Hat