My First Visit to Disneyland (Part 1) I'm an avid Disney fan, so it won't really surprise anyone to know that I've been to Walt Disney World numerous times, but some are surprised when I tell them that I've never been to Disneyland.  That changed this month as I made my first visit.  It was an interesting experience to say the least and as you will see, some things were great, some were not so great.

I have so much to say about this small, yet awesome trip that I will have to break it down into three parts.  I will have plenty of photos and some video for you all to enjoy.  I will also be on an upcoming episode of the WDW Tiki Room, which plays on Sorcerer Radio Fridays at 8am (eastern), talking about my experience at Disneyland.

"Do not go to Disneyland and think that you are going to Walt Disney World".  This was the advice of many when I announced my trip to the Disneyland Resort.  I took that advice and tried to be as objective as I could, but It's hard when all I've ever known of Disney parks is the behemoth in Florida.

For starters, my wife and I stayed off property at the Howard Johnson.  This was to save some money, but it was also strategic.  The HoJo Anaheim is walking distance to the parks, which is just awesome.  The walk over was nice and the weather was not too bad (I did hear some complaining that it was hot).  Being from New Orleans, if the heat index is not over 100, I'm grateful. As we walked up through the front entrance, it was strange.  It was not as grandiose as the Disney World entrance, but It was nice.  One thing that was odd, was that as I peered to my left, I noticed two castmembers walking in with us, but they were dressed in their Frontierland costumes.  This was a strange trend that we had to get use to over the trip, as we saw it over and over again. As most know, Disney World castmembers always move through the parks via backstage and at Magic Kingdom, they use the utilidoors (the MK underground area).  At Disneyland, we could see them moving about in the parks and they entered work and left work through the main gates of the park.

It was a Thursday and we had planned on going to the parks for three days (our first day was a little shortened due to travel).  We arrived and got our passes.  Our plan was to use our first shortened day at Disneyland, second day at California Adventure and finish  up Disneyland on Saturday.  This was strategic as well, as we were avoiding the Halloween party at Disneyland on Friday.

It sure felt like Disney as we walked up. The decorations for Halloween were everywhere and it looked great.  As we made our way under the Main Street Railroad, we came out onto Main Street and it was awesome.  For me, it was all about the nostalgia of this area and thinking that Walt, himself, walked this same route.  We took a quick walk around and stopped to take a photo in front of the fire station.  We just sat there and talked about how great this idea was and how crazy Walt was for actually implementing it.  Thank god he did. Off we went to explore.  We headed down Main Street and saw the most shocking site for all WDW lovers, Sleeping Beauty's castle.  So small, yet so quaint.  It was a nice fit for the park but it is a definite shocker. We headed to Tomorrowland to grab a Fast Pass for Space Mountain (Ghost Galaxy Version).  We rode Autopia and then waited in line for It's a Small World.  Yes, we waited for IASW.  As you will see, this is somewhat of a trend.  Autopia had a line, just like at WDW but we were just enjoying the views and taking in the park.  Their Autopia seems really long and they have some nice sections like the "Car Park" and the off road area.

One thing that we talked about while in line for Autopia, was that the old People Mover track was just sitting there, dormant.  So sad, given that the TTA is one of our favorite rides at WDW.

The line for IASW was a little longer than I would normally wait, but we wanted to do everything we could, including rides that are also at WDW.  After that we hit the Matterhorn.  This is a classic for Disneyland and we were really excited to ride it.  After we rode it, I was kind of sorry I did.  It's a "must do" but be prepared to be tossed around and beat up on this one.  I was slammed into every surface of the ride vehicle that was available. We had lunch in Tomorrowland at the Lunching Pad and it was .... meh. Burgers and a few fries for 10$.  I am happy to say that this was the low-light of food for this trip.

Fast Pass time!  I loved their Space Mountain. The track was much smoother and the music was themed with the scary flaming skull guy that chased you around the dark.  I like sitting side by side in the ride vehicle as well. As we continued our day,  I overheard a local mention that it was very crowded, and I would have to agree.  One thing about Disneyland that is different, is that many of the ride lines are outside so you see everyone waiting in line.  This adds to the other throngs of people just walking around and you eventually feel like you are at Woodstock.

We knocked out a bunch of the rides and then had to run back to our room for a second.  After the short break and a five minute walk, it was back  to Disneyland.  We took a detour through Downtown Disney, as we planned to eat at Earl of Sandwich.  My wife is a huge fan of this over the counter restaurant so it's a must if it is in eye-shot.

As some of you know, I am not a huge Downtown Disney fan but I enjoyed the Disneyland version.  The walkways are larger and more spread out.  You don't feel like there are 800 people on top of you at all times, like in WDW.  We did see the new Anna and Elsa Boutique... oh boy, this looks like a modern day gold mine.  Little girls will be flocking to this place like it's a One Direction concert.

After a nice meal at "Earl" we headed to the monorail to get back to Disneyland.  The monorail system in Disneyland had my head spinning, and not in a good way.  I had to keep reminding myself that this monorail was not really intended to be a resort transport system as it was more of a ride.

Anyway, so the monorail takes you from Downtown Disney and deposits you in Tomorrowland.  For this to work properly, they scan your ticket at the monorail station in Downtown Disney.... wait, what?  Yes, and then once you are near Disneyland, you enter off of Harbor Blvd and take twisting and winding journey through Autopia and over the Nemo submarine ride.  It's bizarre but I guess it's kind of interesting.  One thing that I didn't really like was that the monorails had blue neon lighting inside of them and they were pretty dingy.  I'm also more of a fan of the white monorail cars in WDW.  We can chalk that up to personal preference.

We were back in the park and headed off to knock out some of the other rides.  We really enjoyed Big Thunder Mountain and the special effects in the last mine shaft.  We stopped by the Haunted Mansion but the line was enormous.  The Nightmare Before Christmas themeing looks awesome and we really wanted to ride it.  Hey, what about a Fast Pass?  Not so fast, Sorcey!

As most of you know, WDW is littered with Fast Pass terminals and even has Fast Pass distribution for some rides that have no business having Fast Pass at all.  I'm looking at you, Mickey's Philharmagic. Well my friends, Disneyland is an entirely different ballgame.  Most of the rides DO NOT have Fast Pass... even some of the E-ticket rides, which kind of blew my mind.  We walked all over trying to find the Fast Pass distribution for Haunted Mansion.  We finally opened up our Disneyland Noob map and noticed that no Fast Pass was available.  Ditto for Pirates of the Caribbean.  So we had to pick the line we would wait in. POTC won because it was only 45 minutes.

I really enjoyed this version of POTC.  The drops are bigger and it's set in the swamps of the south which was kind of cool.

Time was running out, so we were able to do the Jungle Cruise which was basically the same, and fun.  We decided to head over to the Indiana Jones ride and 60 minutes.... blah!  Well, they do have Fast Pass, but they were out, so into the line we go.  We figured that we could ride it and be out in time to line up for Fantasmic!  As we made our way to the temple entrance the lights came on and we were told the ride had broken down.  We had waited about 40 minutes and no ride (insert mad face)

Bad news: no ride.  Good news: we got a good spot for Fantasmic.

The Disneyland version of Fantasmic is interesting.  They have a similar storyline but it is set around the Rivers of America area and you can sit on the ground near the water's edge.  My favorite part of the show is the usage of the Columbia ship.  Very impressive.  I do like the WDW backdrop a lot better though, and the Disneyland dragon was noticibley absent.  Instead they thrust Maleficent high into the air on a lift and Mickey battled her instead.  It was a good show but would have liked to see the dragon, since I've heard so many good things about it.

After Fantasmic, we stopped off at Astro Blasters (which is Spaceranger Spin, only with better blasters) and I got lucky and found a sweet spot.  The wife was not very happy but this was my score about half way through the ride.  I just sat back and enjoyed the scenery with my "9"s plastered all over the screen. Tune in for the part 2 as we take on Disney's California Adventure! 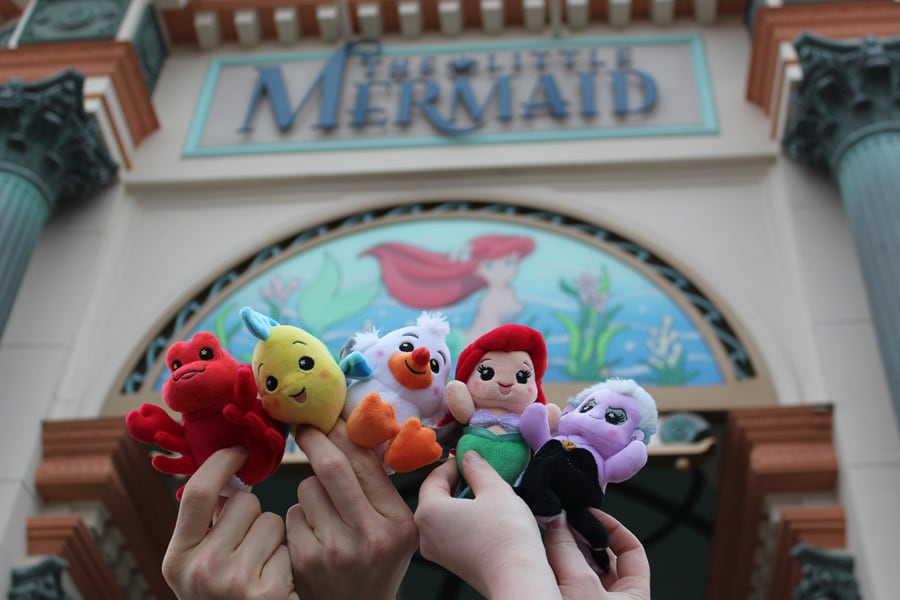