Disneyland raised prices to shorten waits. Here are the results Like scores of other Disneyland fans, Craig Yoshihara has developed his own time-tested technique for avoiding long wait times for rides in the park.

The pastor from Dinuba, Calif., who visits at least once a month, rushes in as soon as the gates open and quickly heads to Space Mountain and Star Tours before hitting other popular rides. He walks in a counterclockwise direction around the park — against the tide of visitors — and avoids the queues between lunch and dinner time, when the park is most crowded.

“I don’t think most people spend the time looking at flow patterns in the park,” Yoshihara, an annual pass holder for nine years, said of his strategy. “It’s really good to do your research first.”

See how (and when) to avoid the lines »

There is good reason for such efforts. Average wait times at the Disneyland Resort have been on the rise over the past few years, despite efforts by the park to ease crowding by raising ticket prices on peak demand days and expanding a ride reservation system, among other changes.

In fact, Disney has faced queuing problems for so long that it has become a pioneer in line management, dating back to the early days of the park when it used stanchions and tape to create switchbacks that are now widely used at airports and theme parks worldwide.

A Times analysis found that the average wait time for the resort’s most popular rides in the first six months of the year was 24.4 minutes, a 28% increase over the same period in 2015 when the park drew record-high attendance numbers.

In the first six months of the year, the ride with the longest average wait time at Disneyland was Space Mountain, at 65 minutes, up from 48 minutes in the same period in 2015, according to the analysis.

The ride may have gained popularity because the park revamped the attraction in late 2015 to include characters and scenes from “Star Wars” movies. The “Star Wars” overlay ended June 1.

At adjacent California Adventure Park, Radiator Springs Racers had the longest average wait time, 86 minutes, up from 73 minutes in the first six months of 2015.

Average wait times for the busiest rides in both parks 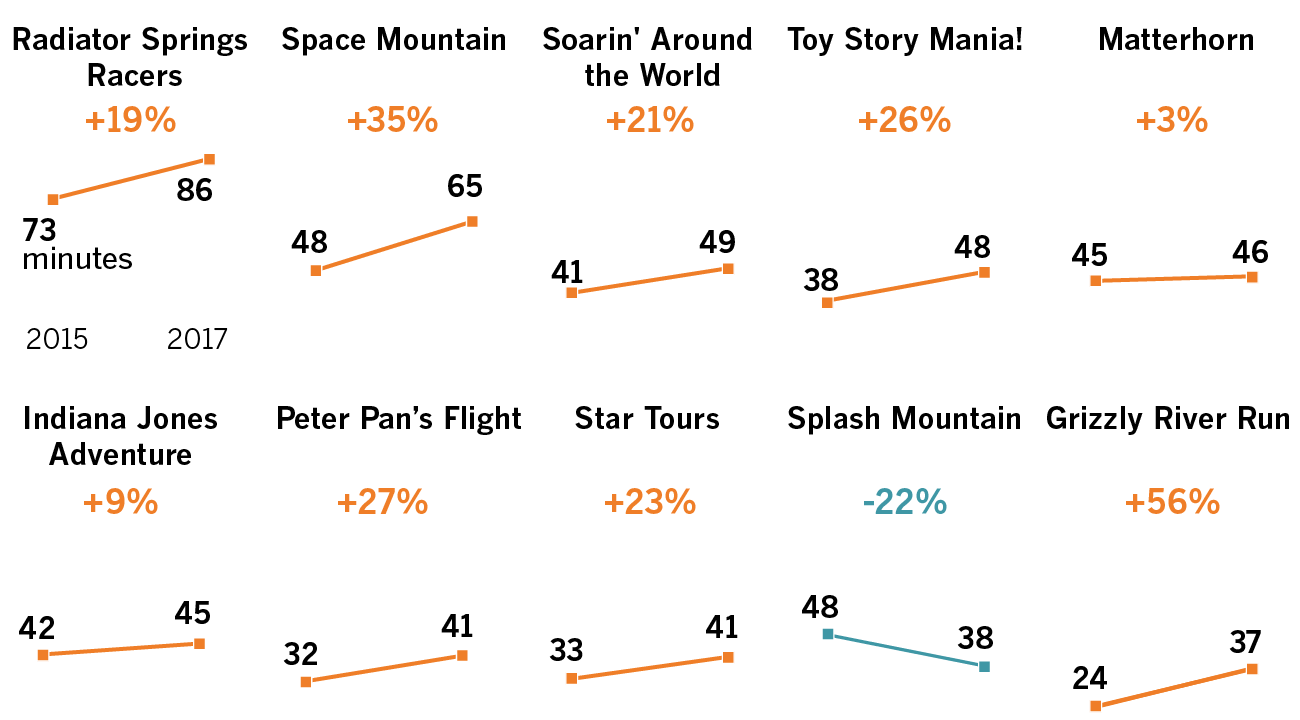 Among other findings since 2015, the data show:

The shortest wait times are typically on Thursdays. Saturdays have the longest average queue times, 25 minutes. September and January are the best months to avoid long lines at the resort. On Jan. 22 of this year, the average wait time for the most popular rides was the shortest, only 7.6 minutes The longest average wait times have been at the end of December and July as well as mid-May, around the start of spring break for most area schools and colleges. Over the past two and a half years, the day with the longest average wait times was May 20, 2017, when it took 42 minutes on average to get on a ride. The park hosted one of several graduation night parties on that date. Only one of the popular attractions had a wait get shorter; that was Splash Mountain (down by about 11 minutes).

The long queues reflect strong demand for the park’s attractions, say Disney officials, who note that the park has made several efforts to reduce wait times. They also pointed out that when attractions are closed for upgrades or construction, wait times increase for the rides that remain open as demand continues to grow.

“We continue to work on managing demand by expanding the resort and adding new attractions, balancing offerings at our two theme parks, and providing seasonal pricing to help spread visitation throughout the year,” Disneyland spokeswoman Suzi Brown said.

But simply adding more attractions to feed the surging demand isn’t so easy. The 157-acre Disneyland Resort in Anaheim is hemmed in by a freeway and major thoroughfares on all sides. To make room for the new 14-acre Star Wars land, Disney has had to demolish three attractions, a restaurant and several office buildings.

“In Disney’s defense, Disneyland is tough, logistically, with the size of the property, and the footprint they are working with tends to hamper things a bit,” said Aaron Goldberg, author of “The Disney Story,” a book on the history of Walt Disney and his parks.

Even higher ticket prices to visit the “Happiest Place on Earth” have not dissuaded the Disney faithful — many of whom visit the park dozens of times throughout the year and contribute to the crush.

One-day ticket prices have jumped by nearly 70% at Disneyland since 2007, to $124. An annual pass with no blackout dates now sells for just over $1,000. Prices are so high that the resort began a few years ago to offer California residents a monthly payment plan for annual passes. And sales of some passes have been temporarily cut off at times to help thin the crowds.

Despite the rising cost, attendance at Disneyland has jumped 20% since 2007, to nearly 18 million visitors in 2016, according to an estimate by the Los Angeles consulting firm Aecom.

“People are going to Disneyland in droves regardless of lines, prices or weather, and Disney knows this,” Goldberg said. “They have a captive audience.”

To calculate average wait times, the Times analyzed more than 4 million snapshots of the online Disneyland app and data posted on “wait time” signs installed throughout the resort.

The snapshots were collected by Touringplans.com, a website that offers subscribers planning tips and crowd predictions for Disney and Universal Studios resorts, among other tourist destinations. The Times analyzed wait times on 60 attractions at Disneyland and California Adventure Park for 2015, 2016 and the first six months of 2017.

The wait times posted on the Disney app and on park signs are considered very accurate, according to a 2015 study by Touringplans.com. 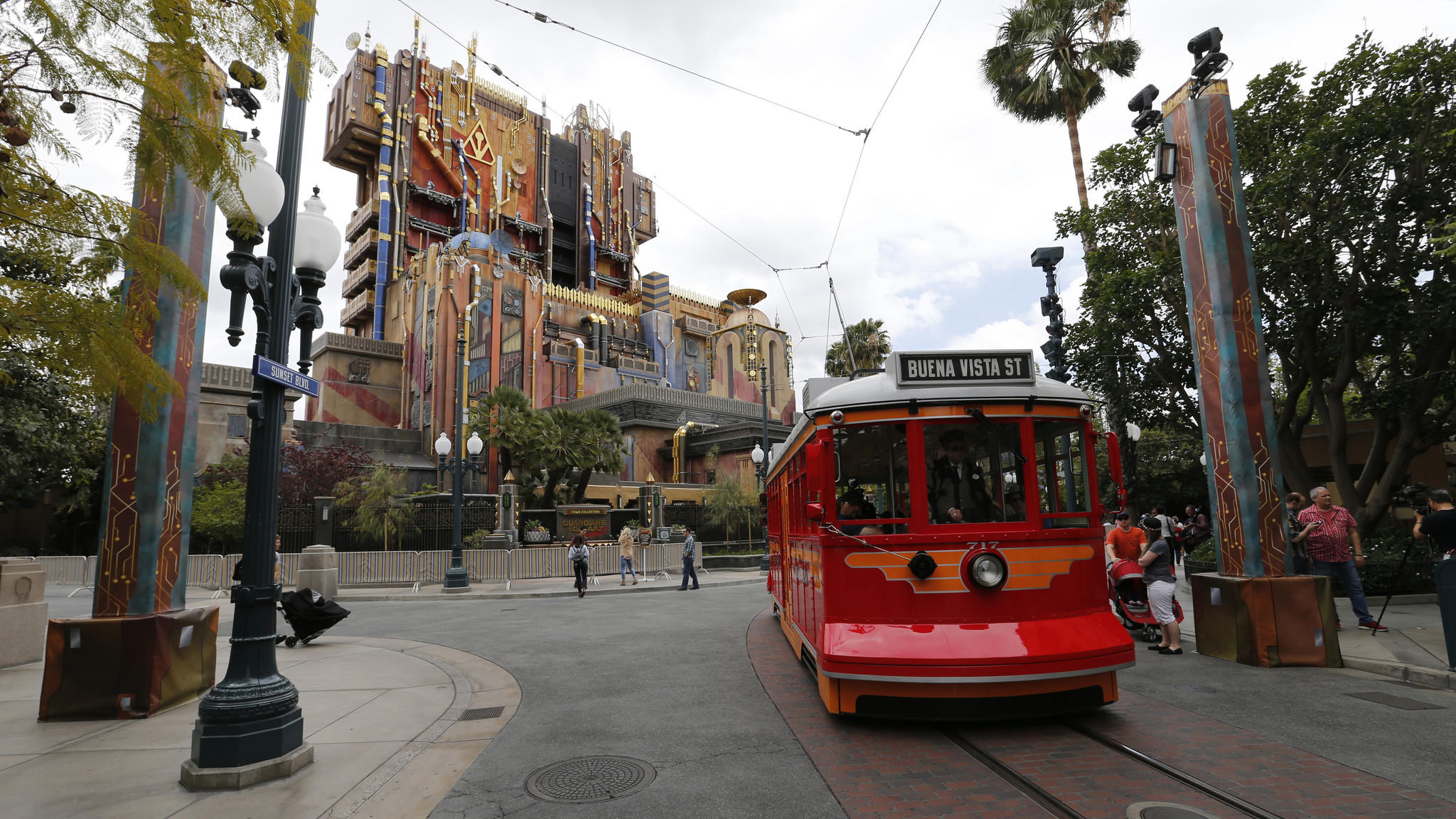 An exterior view of the Guardians of the Galaxy: Mission Breakout ride in Anaheim shortly before the crowds showed up for its May debut. (Allen J. Schaben / Los Angeles Times)

Disneyland representatives declined to say how they measure wait times, but they said they validate the measurement by handing out a red plastic card — embedded with an RFID chip — to a guest at the end of the line of an attraction. The card is scanned with a handheld device when it is handed out and again when the guest with a card reaches the front of the line. The time in between the two scans is the wait time. Such measurements are taken several times a year.

New attractions, as expected, draw the biggest crowds, at least until the novelty of the ride wears off. At California Adventure Park, the drop-tower ride known as Twilight Zone Tower of Terror was revamped this year to feature Marvel superheroes and was renamed Guardians of the Galaxy: Mission Breakout.

During the first month after it opened, the new Guardians attraction had an average wait time of 93 minutes, with the maximum wait time climbing to five hours, according to the data.

Disney representatives said the park is reopening several attractions this summer that were closed during construction of the new “Star Wars” land expansion. Those attractions, including Fantasmic and the Disneyland Railroad, will give visitors more options and help reduce wait times, they said.

Average wait times at Guardians of the Galaxy: Mission Breakout 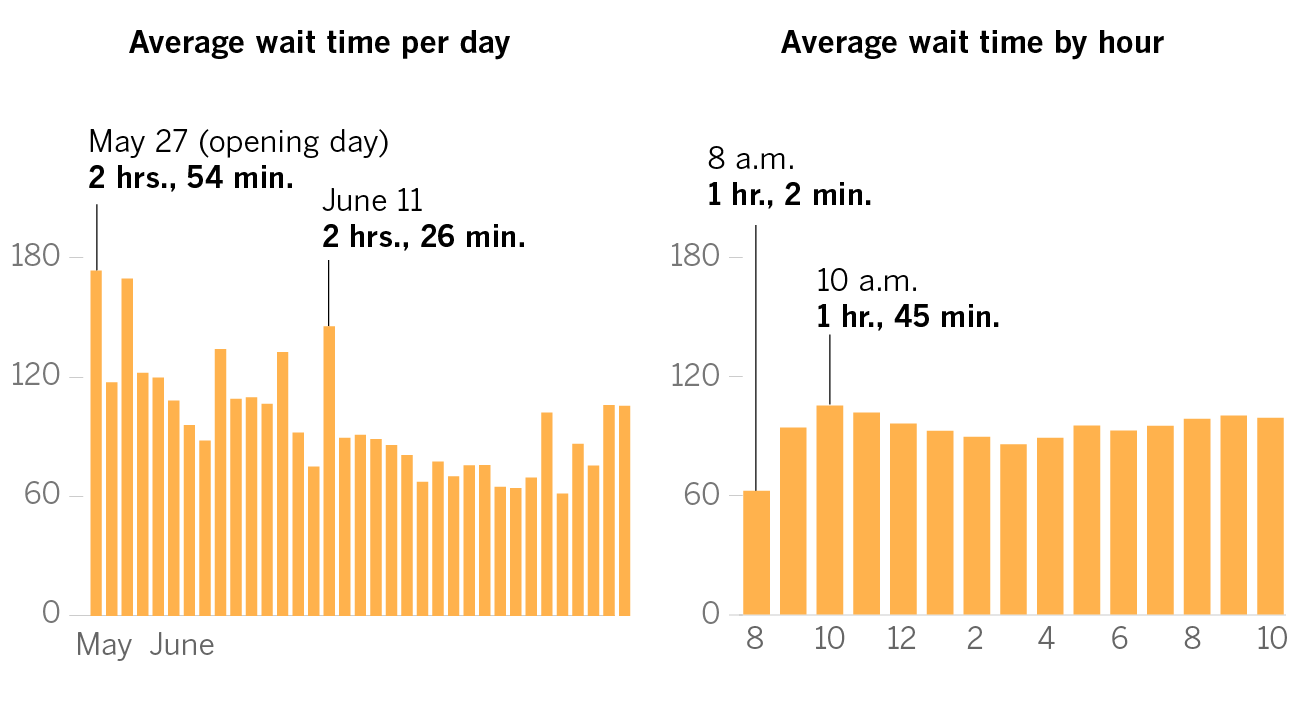 Find out which days have the lowest wait times »

Theme parks — Disney resorts in particular — have wrestled for years with ways to cut wait times without dramatically limiting the number of paying visitors to the parks.

In 1999, Disney introduced “Fastpass” a virtual queuing system that lets parkgoers reserve a time to ride an attraction. A kiosk spits out a paper ticket that designates the time a visitor can return to the ride and avoid the long lines.

This year, the resort added the Fastpass option for Toy Story Mania at California Adventure Park and Matterhorn Bobsleds at Disneyland, bringing to 16 the total number of rides that accept the Fastpass reservations.

Disney officials noted that the posted wait times reflect how long guests in the standard queues must wait and not the wait time for people who use the Fastpass system.

The wait times analyzed by The Times also don’t reflect the queues for visitors who used the “single rider” lines, which let individuals avoid longer waits on seven rides in Disneyland and California Adventure Park.

In another attempt to address overcrowding, the Disneyland Resort adopted “seasonal pricing” last year at its Anaheim parks and other resorts. Under the new ticketing system, the daily fare on low-demand days dropped from $99 to $97 but the price increased to $110 on “regular days” and to $124 on peak days.

Earlier this year, Disneyland announced plans to launch a new electronic version of the Fastpass feature, which would let park visitors use a smartphone app to book an appointment time. The advantage of the smartphone system — to be named MaxPass — is that park visitors don’t have to stand in line at a Fastpass kiosk to get a paper ticket. The new feature will cost $10 a day.

The wait-time analysis shows that wait times rose during the 60th anniversary celebration in 2015 — coinciding with an estimated 9% increase in attendance — and then dropped slightly after the new daily ticket pricing schedule was adopted. Still, overall wait times rose from 2015 to 2017.

If the trends continue, attraction lines are likely to grow longer this summer.

At California Adventure Park, big crowds are expected for the “Summer of Heroes,” a celebration of its Marvel characters, as well as for the new Guardians of the Galaxy ride.

“As a pass holder who can visit frequently, I have the option to return, but I imagine that families planning a trip and only getting one chance to visit would find this incredibly frustrating,” said Vy Spear, a hotel public relations manager who has had an annual pass for Disneyland for eight years.

Disneyland is the second most popular theme park in the world, behind only the Magic Kingdom park near Orlando, Fla.

Disneyland reached full capacity and had to close its gates twice this year, on Jan. 4 and again on May 20, both days representing either the end or the beginning of the blackout period for annual pass holders.

Despite their best efforts, even veteran pass holders sometimes spend hours waiting for a ride that lasts no more than a few minutes.

Yoshihara said he has waited as long as two hours to ride Radiator Springs Racers at California Adventure Park. “It seems like year after year, even with the new pricing policy, that the lines haven’t been reduced,” he said.

Pam Wycliffe, a graphic designer from San Francisco, said she cuts down on wait times by designating one person in her group to run ahead to book an appointment time for the next ride through the park’s Fastpass reservation system.

“So many times people don’t understand the system,” she said.

Get the details: Don’t waste your time at Disneyland. Here’s how to avoid the lines »

This is your brain on Disneyland: A Disney addict's quest to discover why he loves the parks so much

12:15 p.m.: This article was updated with additional comments from Disneyland representatives.

This article was originally published at 3 a.m. "Christmas in July" begins on the Seasons Channel, Today! 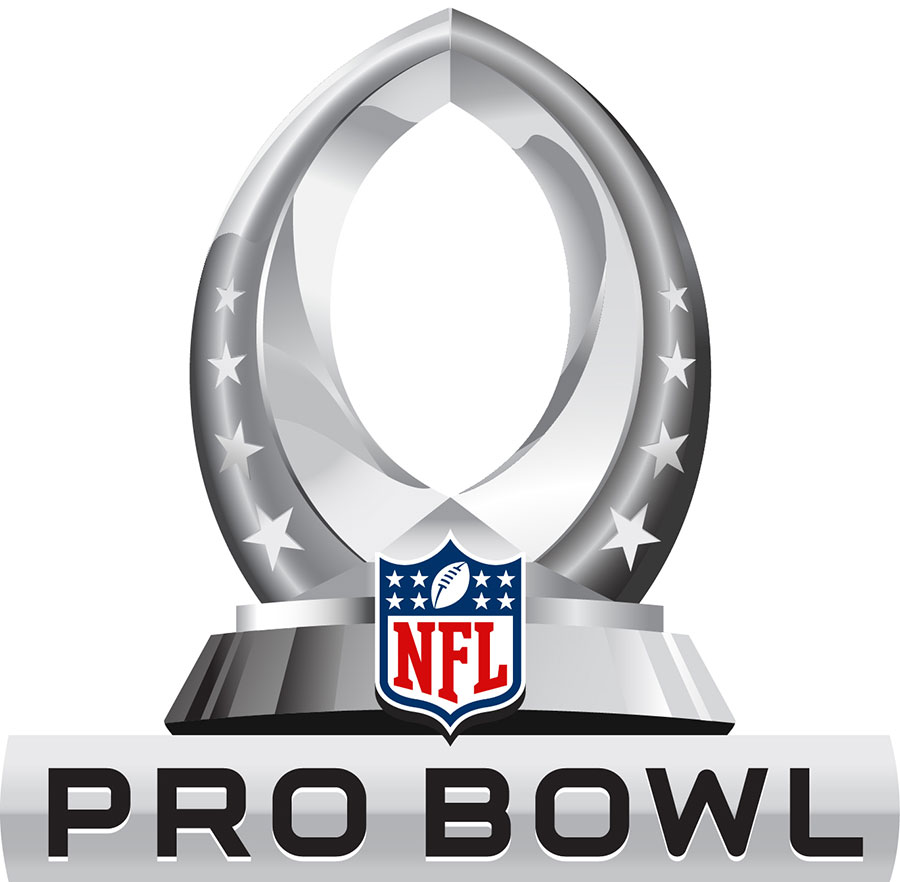